Linearizability vs Serializability, and Distributed Transactions

Linearizability vs Serializability are basic concepts in distributed storage systems. However, they are easy to confuse. And there are few good materials to clarify them.

Linearizability supports two operations: read a value, write a value. It can be more useful (we’ll see later) if compare-and-set is also supported.

Linearizability is a recency guarantee. Once a writer sets new value, the value immediately takes effect. All readers immediately see the new value. Readers always read the newest value. Operations in Linearizability are by nature total ordered, and there are no concurrenct operations.

Serializability is an isolation level for database transactions. It comes from database community area, where is a different area that Linearizability originates.

Serializability describes multiple transactions, where a transaction is usually composed of multiple operations on multiple objects.

Serializability doesn’t guarantee the resulting serial order respects recency. I.e. the serial order can be different from the order in which transactions were actually executed. E.g. Tx1 begins earlier than Tx2, but the result behaves as if Tx2 executed before Tx1. That is also to say, to satisfy the same Serializability, there can be more than one possible execution schedulings.

In databases, Serializability is usually reflected by transaction timestamps. Transactions, though executed in parallel, behave like they executed in the serial order of their timestamps.

Serializability requires the total order of transactions. The transaction performs its reads and writes at the same timestamp (its commit timestamp). However in Snapshot Isolation, a transaction’s read and write timestamps are allowed to drift apart. (Stated in Cockroach paper - 3.3, or this article.)

But “recency” is still a useful ingredient. Spanner coined the concept External Consistency. It combines “recency” into Serializability (though Spanner paper directly calls it “linearizability”).

Remember Serializability allows a serial order that an earlier Tx1 behaves as if executed later than Tx2. It is the violating case that External Consistency wants to capture. See below chart. Nodes have inconsistent clocks. Tx1 executed earlier than Tx2. But Tx1 obtained a later (bigger) commit timestamp. Particularly on Node C, Tx2 sets value later than Tx1, but Tx2 is setting with an earlier (smaller) timestamp. This is abnormal. 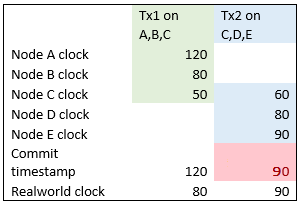 Spanner fixed the above issue with Commit Wait. You can read more at article1, article2.

However, see below chart (N=3, W=3, R=2). Network has varying delays. Client A sees partially the new value 1, but client B sees only the old value 0. Linearizability is (partially) violated. 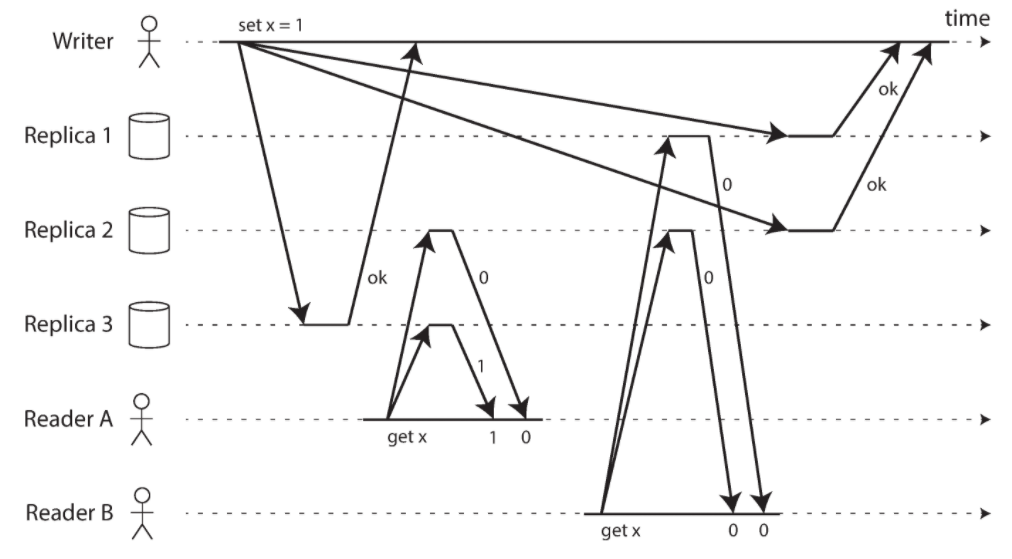 Total Order Broadcast (also known as atomic broadcast) is a protocol to exchange messages across nodes. It satisfies

You can find that Total Order Broadcast behaves eactly like a log that is consensus across all nodes. Messages are ordered by LSN (log sequence number). CORFU is a realworld project that builds the distributed shared log.

Total Order Broadcast can be seen as many rounds of consensus. In each round, nodes propose the message to send next, and then decide and agree on the next message to be delivered in total order. Also, Paxos implementation usually relies on the the underlying logs. The log can be seen as the broadcast messages ordered across all nodes.

Though 2PC (Two-phase commit) is a popular algorithm, it does not satisfy the “Termination” property. A typical mitigation is to implement each participant and coordinator as a Paxos quorum, which is highly available. See Spanner.

From the above, you can see Consensus and Total Order Broadcast are equivalent. I.e. we can use one to implement the other. E.g. Paxos is essentually broadcasting ordered log messages. Total Order Broadcast, in each message round, can use Paxos to agree on message broadcast order and message exactly once.

More, both Total Order Broadcast and Consensus are equivalent with Linearizability.

Besides the equivalence chain, Linearizability with compare-and-set <=> Total Order Broadcast <=> Consensus, there are more things equivalent to them. These equivalence are among the most profound and surprising insights into distributed systems. (Designing Data-Intensive Applications book, page 374.)

These equivalence forms the foundation that we can implement distributed transactions. We will see more in the next section.

Into the distributed transactions

2PC can be much more flexible .. actually .. Let’s think about a series of questions.

First, how do transaction operations (reads, writes) enforce their ordering?

Next, how do transactions determine conflicts? What is treated as a conflict?

The Lock mentioned above is generalized. It can be the common literature lock (e.g. MySQL InnoDB), or a read/write intent (e.g. CockroachDB), or just a timestamp (e.g. Percolator), or a read/write dependency tracker (the SSI algorithm). Instead of calling them Lock, they are actually the “share points” between transactions. Transactions use these “share points” to interact with each other, and to determine the ordering of their read write operations.

(More complications .. If you are thinking if Lock is implemented by timestamp, how can the code atomically compare the timestamp and commit, or to implement the blocking behavior. First, see Latches vs Locks. The Latch vs Lock difference comes from database community area, where Lock applies to transaction and Latch applies to database internal code, where they are both to control the concurrency. In the typical code, cmtlock.Lock(); compare timestamp; do commit; cmtlock.Unlock(), cmtLock is a Latch, while the Lock here is timestamp, or you can even say it’s a lockless OCC transaction protocol (which uses Latches). So to answer the initial question, in database internal code, the atomic condition check & do and blocking behavior can be implemented by Latches. Besides, B-tree is also a place to use many Latches.)

Next, when a transaction encounters the Lock held by another Tx, should it wait or not?

Next, how do a distributed transaction determine the commit is finished? We know the information is scattered on many nodes.

TL;DR. I summarized all the above in a chart. The spectrum of strageties greatly helps understanding and designing distributed transactions. Given the spectrum, there are a few interesting possibilities seem missed to be addressed in any current implementation 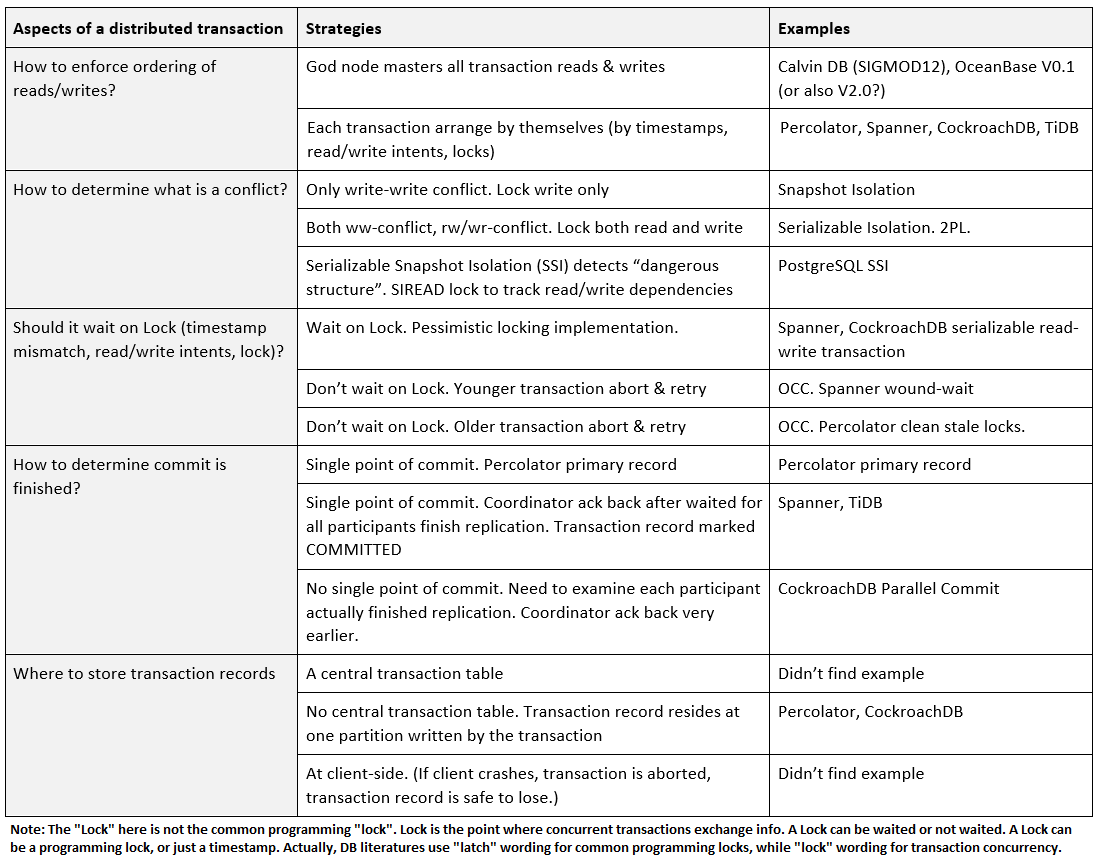