Erasure-coding is widely used in storage to improve reliability and to reduce storage overhead, compared to the classic 3-replica approach. “Erasure” means the data is totally lost. This is in contrast with error correction techniques, in which we have data but some bits in it is incorrect. Note that besides storing data, erasure-coding related technologies can also be used in network coding such as how to transimit data robustly.

The most commonly used erasure-coding is Reed-Solomon (RS) code. Note that all the computation is on Galois Fields. See An Introduction to Galois Fields and Reed-Solomon Coding. In a word, RS code is linear combination of each data symbols, and in which generator matrix has every submatrix invertible. Galois Fields is generated by a seriers of polynomial operations, but what coding theory actually needs is only a finite field (so that we can represent it in several bytes), which supports all math operations (so that we can calculate), and the major math operation should be easy for computer (e.g. add is XOR).

The RS code is a MDS (maximumal distance separable) code. Actually it is the most classic, simple, and straightforward one. MDS means an (n, k) code is able to recover any k-loss. Each vector in codeword space has at least n-k+1 elements different, so that after n-k losses they are still differentiable and we can revert them back to original data. See Coding Techniques for Repairability in Networked Distributed Storage Systems (Frederique Oggier) chapter 3. The longsurvey also gives important notations widely used in coding theory papers, such as what does (n, k) code means, code generator matrix, parity check matrix, etc.

There are variants of RS code, for example the Local Reconstruction Codes (LRC), which recoverability for reconstruct latency by defining local groups. There are also array codes, in which each node stores an array of symbols rather than one symbol (as in RS). Also, there are codes that only relies on XOR operation, rather than Galois Field arithmetic which is much slower and consumes more CPU. Here’s a brief intro: Erasure Codes for Storage Systems: A Brief Primer (the brief intro also covers regenerating code).

Besides, there’s a Erasure Coding for Distributed Storage Wiki listing bibliography for all sorts of erasure-coding papers including regenerating code. The site is recently somewhat inaccessible. Here’s an archival copy.

The paper Network Coding for Distributed Storage Systems first proposed regenerating code. RS code has bandwidth expansion problem when recovering a failed node. It transmits k * (user data size / k) = user data size, to recover one failure node, which holds (user data size / k) size of data. Regenerating code is proposed to reduce the transmitted bandwidth. The basic approach is that, each node stores an array of symbols rather than 1 symbol in RS. And before transimitting it out, the node do a computation on the array of symbols, and only transmit out the results, so that less size is transmitted out.

The paper “Network Coding for Distributed Storage Systems” uses analysis techniques from network coding theory. It contructs the information flow graph for the code recovering process, and uses max-flow min-cut theorem to duduce the lowest bounds of how much bandwidth needs to be transmitted to recover a failed node.

There are following papers referencing this paper and give easier-to-understand versions of MSR and MBR bounds. Note that MSR and MBR code can also do MDS recovery, i.e. recover all data from any k nodes (n nodes). So, they have two recovery mode, one is regenerating, another is MDS recovery.

I have collected ranges of regenerating code implementations for different scenarios. I will list them in this section. Usually, regenerating code yields much less bandwidth overhead when doing recovery. But in general they share several drawbacks

Paper Optimal Exact-Regenerating Codes for DistributedStorage at the MSR and MBR Points via a Product-Matrix Construction gives the construct of the optimal exact-regenerating MSR code. It is constructed by the product-matrix framework. Or say, the paper gives a good matrix representation for regenerating codes.

The advantages are that the code is at MSR point (for a 9+9 code it can save recovery bandwidth to ~22% of RS code), it is systematic code (i.e. first k nodes contain original user data, so read can be fast), do exact-regenerating (i.e. the recovered node has the same data with the lost one), and it has optimal parameters, i.e. it works for any d >= 2k-2. The math of regenerating recovery is simple, but the MDS recovery has more steps.

The drawback sides of the MSR code are, more computational overhead. Take a (n=18, k=9) code with d=16 as example. For regenerating recovery, it needs to solve a dd matrix inversion, while RS code only needs kk. For MDS recovery, it needs to solve k of (k-1)(k-1) matrix inversions and with several other operations, while MDS needs only one kk matrix inversion. Also, due to the d>=2k-2 limit, this MDS construct only applies to long code, i.e. parity count is almost the same as data fragment count, i.e. ~2x storage overhead at least.

Paper Optimal Exact-Regenerating Codes for DistributedStorage at the MSR and MBR Points via a Product-Matrix Construction also gives the MBR code construct. I think the MBR one is a better work. It is a code at MBR optimal point, allows all (n, k, d) parameters, systematic and exact-regenerating. Also, the computational overhead for regenerating recovery and MDS recover are almost the same with RS code.

The only drawback is, as all MBR codes have, it adds more storage overhead than RS code. I.e. each node needs to store more data than in RS code, and those extra data won’t help data reliability.

In the end, if the extra data overhead is tolerable, MBR code can reduce recovery bandwidth to very low. See paper for the detailed bounds. For 9+9 code, when d=9, the bandwidth ratio compared to RS code is 0.2, storage overhead expansion ratio is 1.8. For d=16, they are ~0.15 and ~1.3.

The paper Explicit constructions of high-rate MDS array codes with optimal repair bandwidth gives an totally different regenerating code construct. Each node stores an array of symbols. Each row across all nodes has a sligtly different coding matrix. The result is, each row independently is an MDS code (actually a RS code), i.e. supporting repair any r failure from any k nodes left. The regenerating recovery is by co-work through rows. Helper nodes read multiple rows, sum them up, and send to the replacement node. The replacement node then decode the corresponding rows out.

For advantages, the code is systematic and exact-regenerating. There is no extra storage overhead than RS code. The row-wise MDS allows it to do MDS recovery on each row independently, which is more flexible, and not like other codes which may force you to decode entire array at once. The regenerating recovery, similarly, decodes r rows each time. This may benefit reconstruct reads. The regenerating recovery has relatively low computational overhead when the code has few fragments: (r^n rows / r) * matrix_inversion(r*r). The transimitted bandwidth for recovery is 1/r of RS code. Another major advantage is, because each row is independently coded, the data update cost is very low, per-row based, i.e. “optimal update” as said in paper.

The disadvantages are, when the code has more fragments, i.e. larger n or r, the required row count per node r^n grows very quickly. Actually, for 9+9 code, this construct is not even feasible. For short code however, it is ok.

In summary, this code construct applies for shorter codes (i.e. smaller n and r). While “Optimal MSR Code by Product-Matrix” applies for longer codes (needs r almost the same large as k) in contrary. Besides, I have written a python implementation for the two codes in galois field, see here.

The paper Simple Regenerating Codes: Network Coding for Cloud Storage proposed a very simple construct of regenerating code. It combines first RS code and than wrap it by XOR. For regenerating recovery, it only needs fixed amount of bandwidth transimtted, from fixed number of nodes (~4 to 6 nodes), no matter the code length (i.e. different (n, k)). This is an interesting property. For disadvantage, it add storage overhead by 50%, compared to using RS code only. The code is very simple. And there is project using it in Hadoop.

Most regenerating code limits the d>=2k-2, and they can do regenerating recovery only one 1 node is lost. Below paper however gives MSR code construct by all parameters (n, k, d). There are disadvantages though, see details below.

Usually regenerating recovery only fix 1 node, i.e. obtain only one symbol. This paper gives a way to simultaneously rebuild multiple symbols. There are other issues though, see details below.

Build new technology from paper to real production is no easy work. There are gaps between each steps. Each gap involves great work.

But, search coding matrix which has holes in it, or in another word has parities covering overlapped data symbols, can be harder. Below I present one of my ways to mathatically search the possible coding matrix. 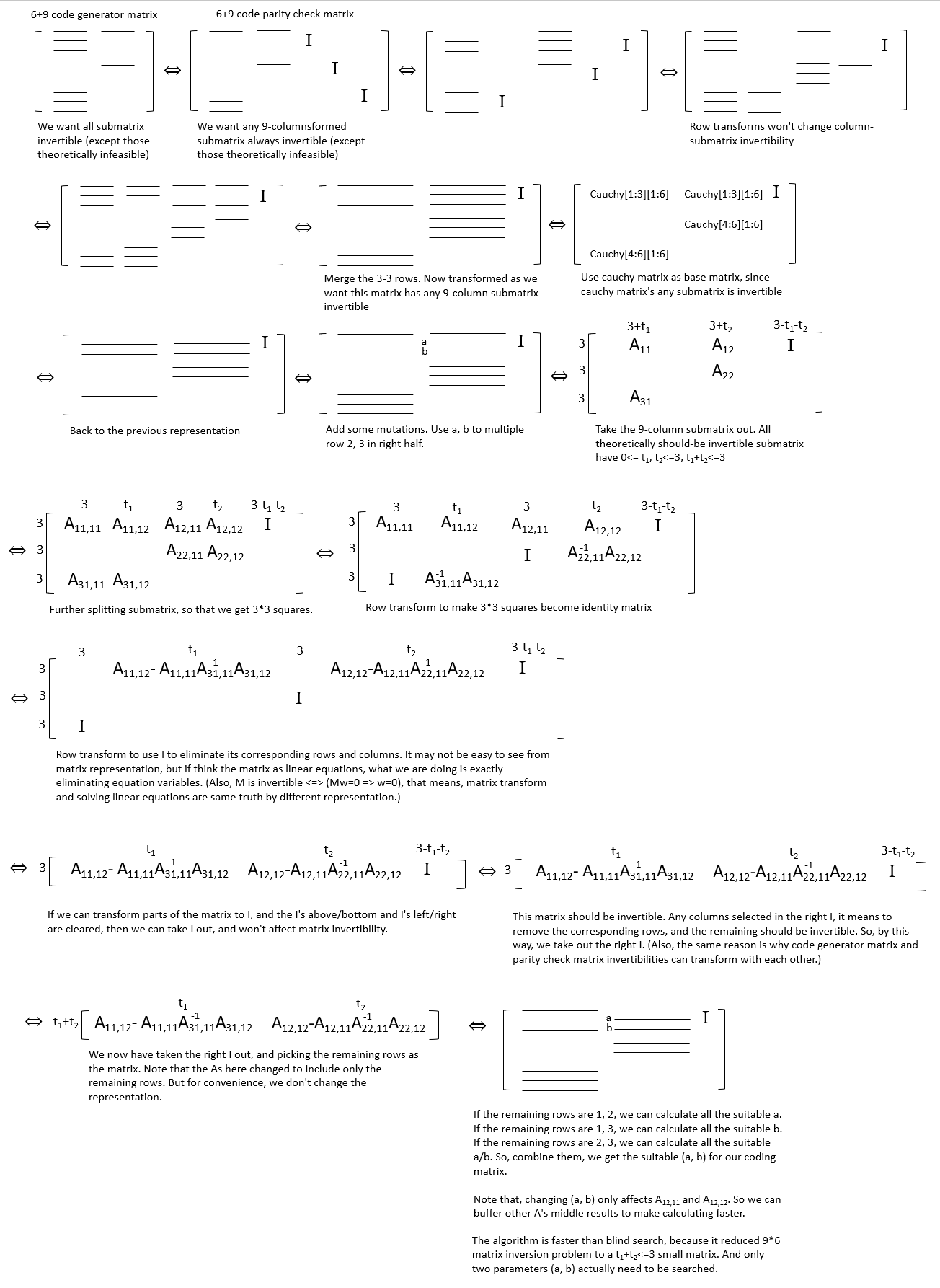 In general, setting more constraints, and applying various math results can reduce the search range or matrix size. Some random search algorithms such as Simulated Annealing can be used. And, running things in parallel on MapReduce can help the search. If we have supercomputers, we can search it their. Supercomputers make up the short of math. And sometime the math is even too complex to be possible. I think that’s why they are super important in all sorts of engineerings and sciences.

Worth attention that, regenerating code doesn’t reduce disk IO count, doesn’t reduce network IO count. What it does is to reduce only the network traffic. And it needs more CPU, and cannot repair more than one failures at once (where RS code can repair all and replicate to save bandwidth too).

There are other families of codes, which can be more attractive for storage systems: