[5] gives an overview of the energy cost in datacenters. The data comes from Amazon.com’s estimates [9]. Servers cost 53%. Power related costs contribute 42% of the total, in which 19% for direct server power, and 23% for infrastructure cooling & power. 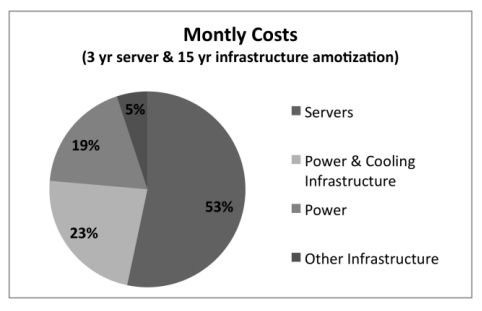 So, for cloud computing and datacenter operations, you save power, you save money. Besides, it protects the earth.

The first thing necessary about energy-awareness is the energy consumption model. They are usually seen in each paper when the author starts to discuss something. [3] shows a popular energy consumption model, which is a linear sum of computer resource utilizations (Ux,y). The model needs the user to calibrate its coefficients (Cx,y) first. The model is basically the same with [1], which has 280+ references. Though simple, [2] gives an evaluation and shows that the model yields less than 9% error. See below

[7] shows that in average an idle server consumes approximately 70% of the power consumed by the server running at full CPU speed; and compared to other system resources, CPU consumes larger amount of energy. [2] shows that CPU is the dominate power consumer of the dynamic part of overall energy consumption, and CPU is usually considered a first-order proxy for dynamic power consumption.

Energy consumption per transaction, however, is not linear. [6] shows that it reaches bottom when (CPU, disk) utilization is about (70%, 50%) in their experiment. See below picture 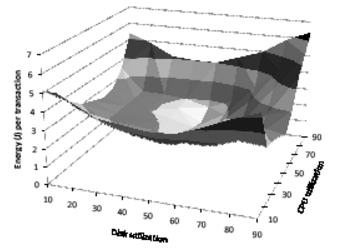 Energy-efficient hardware has been researched for long time. Processor can be powered down. Energy-aware scheduling contributes to a large part. With respect to wireless network, energy-saving routing protocols are studied.

The cloud part is mostly about server consolidation. The challenge is to achieve an “optimal balance between performance, QoS, and energy consumption and include self-aware runtime adaptation”.

Besides, [1] reveals some applications such that, dynamically control the fans according current energy consumption, predict the thermal map in a datacenter and allow the cooling system to cool much or less in different spot, calculate the power budget which may be used in scheduling or planning, etc.

Energy-awareness related to Cloud is almost all about consolidation, AFAIK. Since an idle server needs up to even 70% of their maximum power consumption, server consolidation matters. However consolidation usually needs to cope well with SLA.

The Green Cloud [7][8] is a highly referenced architecture (800+ references), which takes care of both energy consumption and application SLA. The basic idea is to set upper and lower CPU utilization thresholds for hosts, and keep the total utilization of the CPU (by all the VMs allocated to the host) between these thresholds.

There are three different policies to select VMs for migration, when the CPU utilization exceeds the upper threshold.

The major operational expense of a datacenter is power. Energy efficiency is very important in datacenter design. Below is the fomula [10] (page 67)

PUE = (Facility power) / (IT Equipment power). It reflects how efficient is the data center facility to transfer external energy to the IT devices. SPUE = server PUE. It is PUE inside the server, i.e. how efficient the server can transfer total input power to its useful electronic computation components.

Geneal steps to improve PUE can be summarized as following [10] (page 71). 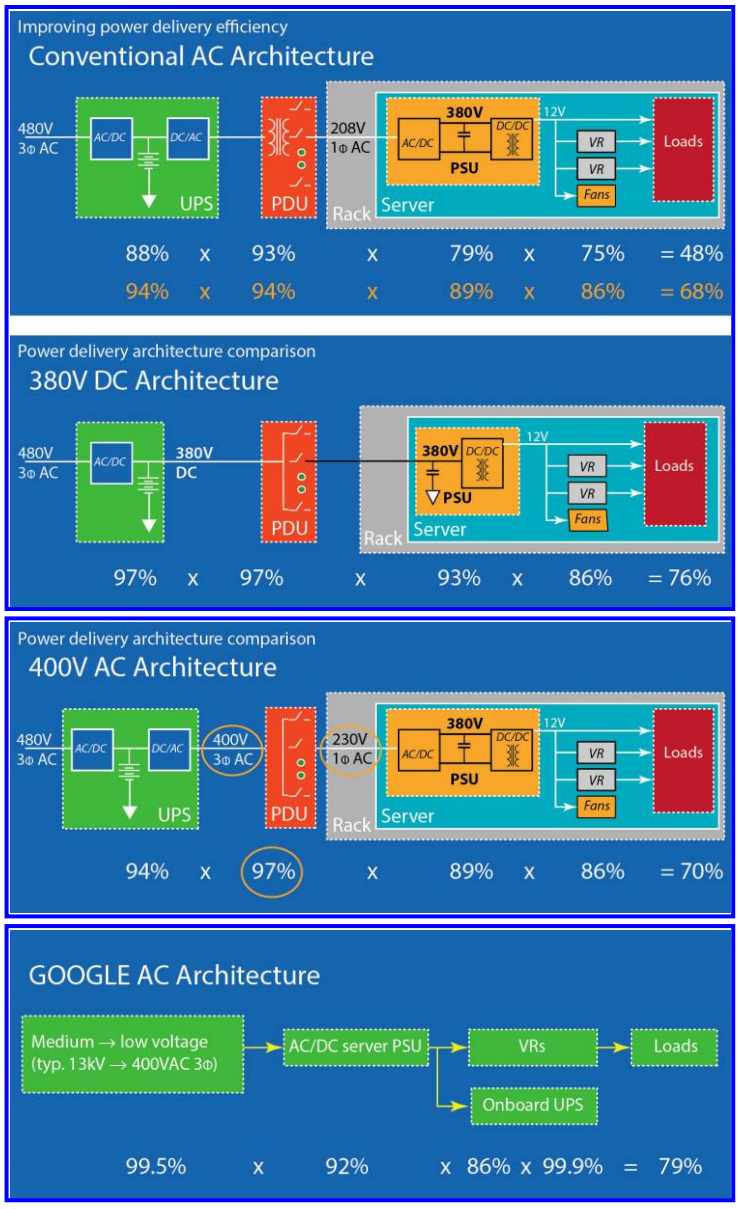 With respect to the power efficiency of computing, a key feature is: under low levels of utilization, computing systems tend to be significantly more ineffcient than when they are exercised at maximum utilization [10] (page 73). This is usually why we need cloud consolidation.

Energy-proportional computing is a different approach [10] (page 76), where energy-consumption of computer hardware should be proportional to its utilization. Though some progress, it is still under-research now. But if it comes true, cloud consolidation is not really needed any more, since low utilization yields low energy consumption in proportion.

[3] proposes a energy-saving network data transfer method, by tuning TCP parameters pipeling, parallelism, concurrency, to their best. [4] gives algorithm to save energy in cache management. Basically in each component of the software path, you can find some energy-saving embodiments. Search more in Google Scholar.